Text editors I have loved

This is long (but worth it!). If you want to skip around…

I. Markdown (or: The red pill of word-processing)
II. iA Writer (or: “I know kung fu.”)
III. Notes (or: Digital Post-Its / pausing the Matrix metaphors for a sec)
IV. FoldingText (or: Becoming “The One”) 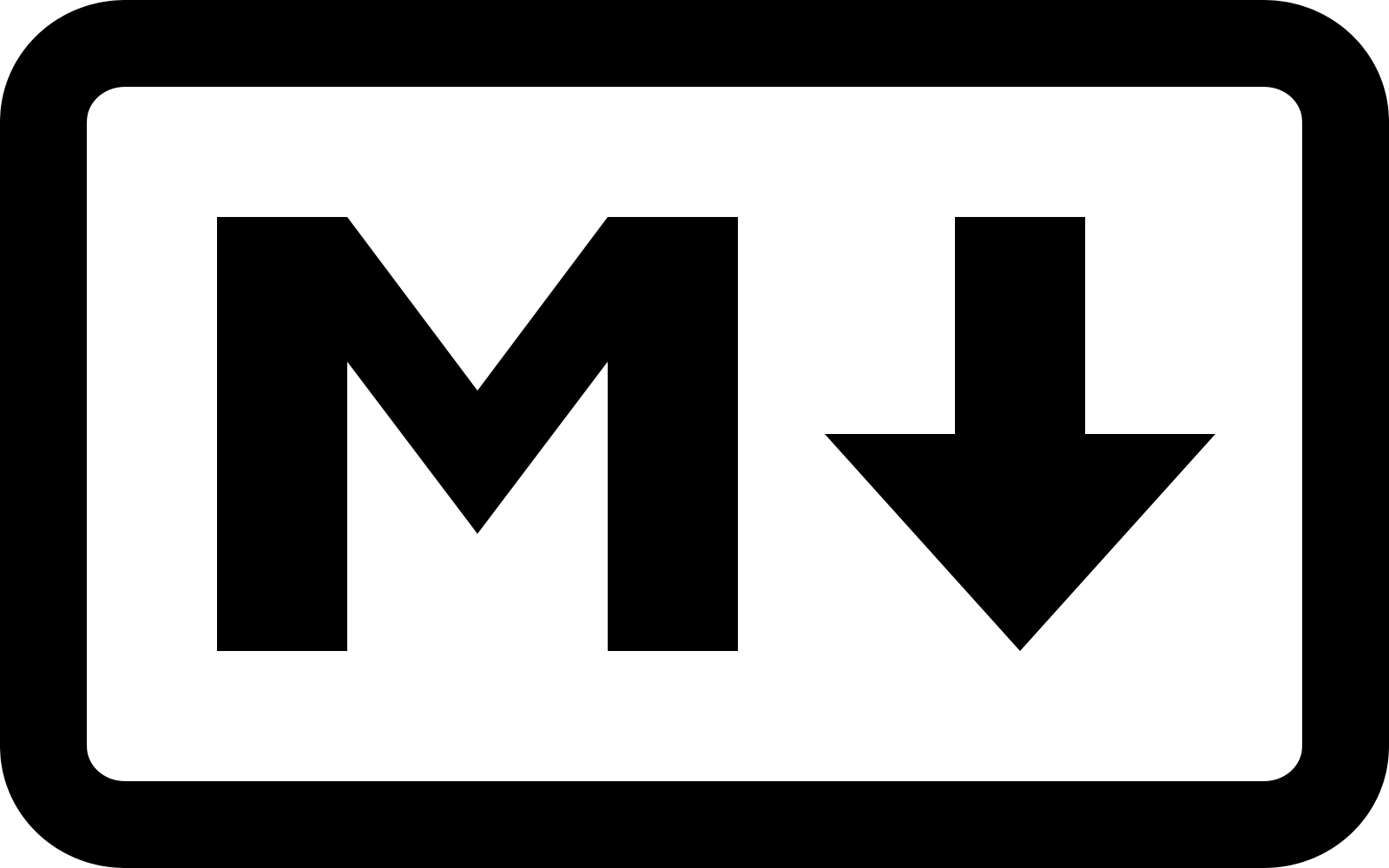 I remember taking the red pill that unplugged me from the WYSIWYG Matrix. It was a webapp called Editorially. It’s dead now, but the thing that mattered most about it was that it supported a little thing called Markdown.

I’d heard of Markdown before, but figured it was something that only sysadmins and Github types used. It had documentation and syntax. It didn’t exist in any word processing environment I was familiar with. But Editorially was created by writers, for writers, and Markdown seemed pretty important to them. So I got curious.

That was a few years ago. Now I can’t write without it. Composing anything longer than an email without Markdown feels like driving through a snowstorm with cheap windshield wipers and a broken defroster: struggling slowly ahead while squinting through crap. Writing in a Markdown-supported text editor like iA Writer, meanwhile, feels like cruising on the Autobahn at 3 a.m. with perfect weather in a manual-transmission Porsche. Clear. Pure. Handles like a dream.

And now the scales fall away. Writing is no longer this monkish, masochistic pursuit where you like having written but fear and loathe actually writing. Now it’s fun. Thrilling, even. You want to do it. For no other reason than to feel the road.

So what is Markdown? It’s the stick shift in the sports car. It’s not an app; it’s a handful of simple plaintext formatting conventions (which many writing apps support) that let you do things like bold and italic and

without ever taking your fingers off the keyboard. Without breaking your flow. No chrome, no mousing, no selecting. You don’t even have to use keyboard shortcuts if you don’t want to. You’re not fighting the machine. You’re one with it.

Markdown is like driving stick because it is fundamentally manual. Right there, that italicization I just did, looks like this in my text editor:

(And that badass code-snippet-looking effect I did in the line right above? I made that happen just by indenting four spaces before the word “manual”.)

This syntax takes all of 5 minutes to pick up, so it’s actually a lot easier than learning to drive stick. But you do have to learn it, because with Markdown there are no visible buttons to push other than the ones on your keyboard. That’s the whole point. It’s hard to describe the difference until you’ve tried it. But once you have, it is viscerally satisfying.

And the genius of Markdown is that it’s based on plain text, so it’s ultra-lightweight and universally portable. You can import or export your writing to anywhere/anything. HTML. PDF. Word. Rich Text. You can even paste it into your email, or the cruddy CMS they make you use at work. All your formatting stays put. No funny business.

Am I making this clear? If you write on a computer, you’re laboring under the user-interface and file-format-imposed tyranny of whatever app you happen to be using. For most people that’s Microsoft Word. Ugh. Does anyone actually like working in Word? No. We all just tolerate it as a kind of crappy consensual hallucination because we don’t know any better. Just like Neo in the Matrix, before he met Morpheus.

Now, you can’t liberate everyone else from the Matrix. But you can unplug yourself. That’s Markdown: it lets you do your computer-based writing in a simple, unmediated, dare I say enjoyable manner—and if you have to export a .doc version to your boss, you can briefly “jack back in” to the Matrix along with everyone else. But you don’t have to live there.

Have you ever been writing somewhere out in public, like in a coffee shop or even at work, and noticed someone looking over your shoulder at your screen in curiosity or fascination? Usually that would be pretty rude thing to do. But when you’re writing in iA Writer, some people just can’t help themselves. (This has actually happened to my friend Ted on multiple occasions.)

Why would someone risk committing such an obvious social faux pas in order to gawk at… a word processor?

Here’s why: iA Writer is just that great.

This thing is beautiful to behold. And why shouldn’t it be? If you’re going to be staring at it for hours on end, beauty matters. It’s not flashy, especially in full screen mode: just a light grey window and a crisp blue cursor. But something about that menu-less void feels inviting and calming, rather than intimidating.

Writing in Writer just makes me feel good, even if the thing I’m writing is tough work.

Writer famously provides no font options. You get what they give you. Luckily what they give you is a meticulously customized, monospaced (or “typewriter-like”) font that feels both informal enough to fart around with, and “professional” enough to encourage concentration.

You will write better in this font. I know I do.

I didn’t really become a Markdown devotee until I started using Writer. It uses “auto-Markdown,” which visibly formats the text as you type—so you get the fleet-footedness of Markdown and the reassuring visual feedback of a traditional WYSIWYG word processor. Have your cake and eat it too.

It’s also really useful for learning Markdown, because you can see all your formatting effects instantly. You can also render out your whole composition at any time in a “preview” window (with more gorgeous typography that’s designed for easier reading, rather than for writing/editing).

This essay is 1000 words so far and I’ve written all of them on my iPhone. That is saying something.

Writer auto-saves/syncs everything to iCloud and Dropbox so I can start jotting something on my phone, bang it into shape on my laptop, and edit/polish it on my iPad. This is so encouraging to the actual habit of writing, because no matter where I am or what physical position I’m in, I can still write comfortably.

Right now I’m kicked back on my couch. My friend Ted, an outdoor journalist, often uses Writer while laying flat in a sleeping bag or perched at the end of a bar, with a foldable Bluetooth keyboard attached to his iPhone. (No wonder he gets gawkers.) One time I got to use it full-screen on a co-worker’s 27-inch monitor. It was like writing in IMAX. It fricking ruled.

They also just made an Android version which looks damn good.

Customizable mobile keyboards (so you can access your formatting characters like #*~ without having to invoke secondary screens or menus every two seconds).

Keyboard shortcuts that add hyperlinks to text in one shot.

Typewriter scrolling (which keeps your cursor in the middle of the screen while writing long passages, instead of getting stuck at the bottom).

Night mode (so you don’t strain your eyes while writing in the dark).

Focus mode (which greys out everything but the sentence or paragraph you’re working on, so you don’t get tempted to keep going back to rework stuff instead of moving forward).

Exporting directly into Medium and Wordpress (no copy/pasting into a CMS).

I’m a professional writer, and I do not write anything for work or fun anymore without iA Writer. It’s that essential, and well worth what they charge for it (which isn’t much).

But get this: my 5-year-old loves it, too. She only recently learned how to read and write, but she’s been playing with Writer on my phone and tablet for years. And I didn’t put her up to it! Just like those people staring over my friend Ted’s shoulder, she couldn’t help herself.

At first it was just screens full of nonsense and emoji; then she’d ask me to take dictation for her; soon she was composing pidgin-English love notes to me and her mom and grandparents. What other text editor or word processor do you know of that can be both a professional-grade tool and an expressive educational toy? I’m damn near tearing up about it. 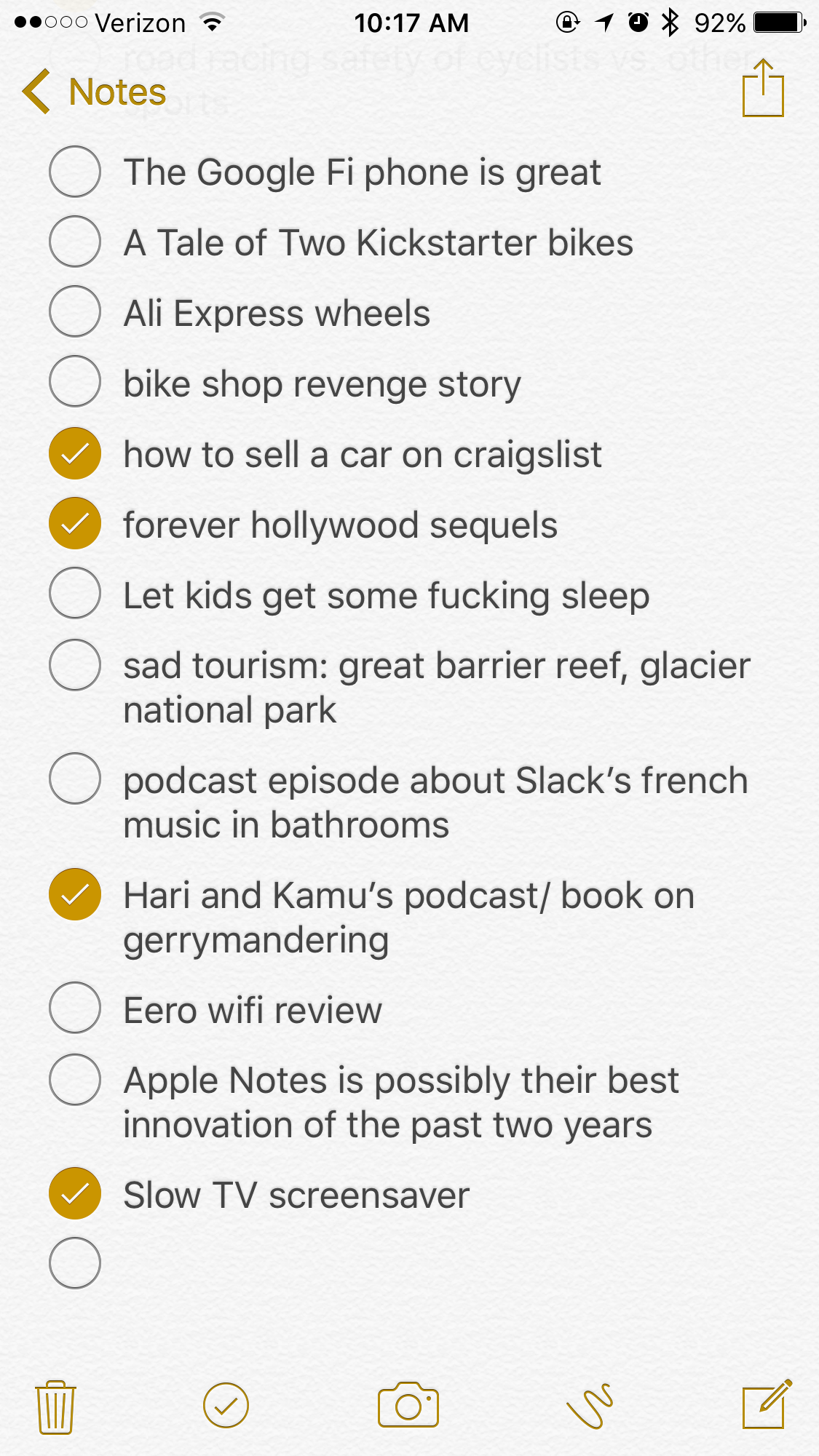 I’ve long wished for Post-It notes on my phone. No fuss, no muss, no stupid digital/cloud “smarts” that just get in my way. Notes is it.

This app used to be garbage, but iOS 10 suddenly made it sing. If you’ve relegated it to a “Graveyard” folder on your phone for years (like I did), pull it out and give it another chance.

What I love is that you can press one button to go into/out of checklist mode, and you can check things off without having to “open” the note (i.e., enter editing mode). Everything saves automatically, and there’s no “Are you sure?” pop-up when you trash a note. That’s why it reminds me of paper. It feels casual and physical and disposable, like jotting directly onto the screen rather than “through” it.

The only things that would make it truly perfect would be if I could:

Then it really would be the ultimate digital notepad. But 99.9% is close enough. 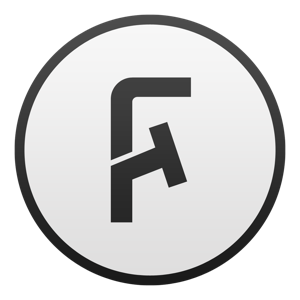 If you’ve read this far, you are a bona fide übernerd of the text-editing arts. So if you use(d) Markdown and iA Writer and still thought:

this is awesome, but you know what would make it even better…

then, my friend, FoldingText is the app for you.

It’s basically just like Writer, but with extra organizational/productivity powers. It can create and navigate outlines, manage to-do lists, handle tags, do calculations, track your timesheet, automate your Pomodoros, and lots of other stuff even I haven’t learned yet.

I use Writer to… well, write stuff, but now I use FoldingText for pretty much everything else that supports my writing: outlining articles, highlighting transcripts, tracking projects and tasks, noodling around with half-baked ideas, etc.

It’s not a database like Evernote; it’s more like a magic yellow legal pad. The developer calls it “surprisingly adept.” (Truer words never spoken.) But it’s hard to grasp unless you see it in action, so:

Think of it this way: If Markdown unplugs you from the Matrix, and iA Writer is “I know kung fu,” then FoldingText is… this: 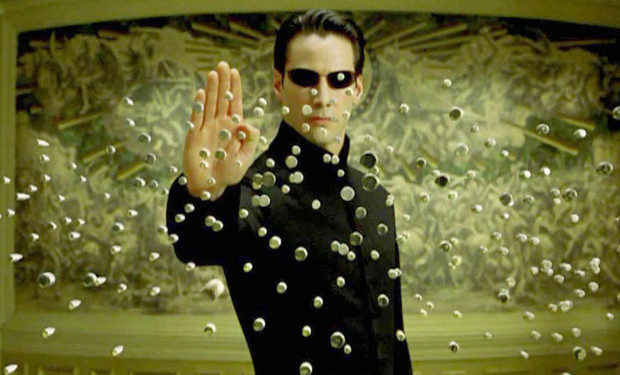 And with that, I can take you no further. I used all three of these text editors to conceive, prepare, draft, edit, lay out, and publish this article. And I loved every minute of it.

what my vote for Hillary was about Everyone I know is struggling to understand (for real or just in lip service) how could he have won? or why would they ever vote for him? This